Next Utö-pedtion (Utö13) will be very soon, from Tue 30.7 till Mon 3.8.2013. Finnish DX-Association will have an annual summer meeting (2-4.8.2013)  in Utö and this FM-DX-camp will be up for that time! Over 30 visitors is expected to participate this meeting.
All are wellcome to visit the SDXL-annual meeting in Utö and Finnish SW archipelago:  READ MORE

Posted by Harri Kujala at 10:08 No comments:

Sunday morning gave us nothing but weak promises. Vertical antenna was removed already yesterday evening and horizontal yagi was up till to end, till Sunday around 11.00 local time. Ferry takes us to the continent leaving at 13.00.

The results of these 10 days looks good, altough the first days in the beginning were clammy.

Tropo was very strong to North Sweden when we installed antennas. It gave distant DXing only with a whip-antenna to Umeå and Örnsköldsvik area! Many DX-stations were logged on the band with tropo but nothing new came up (but many new transmitters were observed).

Tropo-scatter: No hunting on tropo-scatter this time, although some scattering was observed on the band (in the year 2006 scattering was strong to Kaliningrad and Poland, but for example an year ago almost nothing). We do not know what kind of tropospheric conditions is needed over Baltic Sea for scattering here.

Meteors: A lot of stations were identified via meteors, especially Italy is very common here comparing to the continent. Perhaps all European countries noticed via meteors. Those are mostly high-power tx's.

Plus(+)-stations counting (=first loggings ever in Finland)
A lot of plus(+)-stations were logged (=logged first time in Finland). Here a rough compilation by country. Much more will be found later from the recordings:
Russia: 29 - Portugal: 17 - Spain: 5 - UK: 4 - France: 2 - Italy: 1 - Switzerland: 1, - Belgium: 1, Kazakhstan: 1
This list is very divergent comparing to previous years!! Almost no Russians noted before - and of course Iberia emphasis this year is nice.

Posted by Harri Kujala at 22:42 No comments:

This is the last full day in Utö12-pedition. The Sherlock-map did not look promising during the whole day - and finally Saturday gave us nothing. The crew rewinded recordings during the day finding a few new stations.
In the evening the vertical antenna was dismounted. Horizontal yagi is up for possible Sunday morning opening. The ferry leaves the island on Sunday at 13.30 local time.
Better leving the island with empty band on Sunday...

Posted by Harri Kujala at 11:01 No comments:

Only weak activity in ionosphere this Friday. Around midday we had very short peaks to direction south; Italy, Balkan, Greece and France, each lasting only 1 -2 minutes. However, some stations were identified:

No conditions in the evening.... So we played the most significant card-game of this pedition. It was the Utö Championchip 2013:
The winner was Harri (HKU). (Hard fight with JTK till the last round). HKU also won the total score of all games.

Posted by Harri Kujala at 15:00 No comments:

Morning
The crew did sleep only a few hours after yesterday evening's push. Early morning check by JJS woke up the crew at 02.45 utc to Italy-opening. Stations from North Italy, but not big signals.
Later during the morning we've had short peaks to Bulgaria and Turkey (Istanbul).

Midday
Around midday local time there were very srong signals from Russia around Togliatti, Samara and Syzran cities. About 20 new stations (=never heard before) were identified on CCIR-band.

Afternoon
Short UK-opening with BBCs around the lower band, highest was The Wave 96.4. Also a few STL-links on 52.75 MHz (New Style Radio from Birmingham and islamic station on the same channel)

Evening
Nothing observed unfortunately. Expectations were at very high level...

It seems conditions might continue several days in a row.

Posted by Harri Kujala at 09:38 No comments:

This Wednesday finally gave us excellent FM-day! We got nice opening lasting even over 7 hours, starting at 12.06 utc and going on till 19.47 utc !! Finally we had Portugal up to 108 MHz and Spain, too. This was the best Iberia-day here ever - they were audible every now and then during whole opening!
After those best Iberian multi-hops we identified a lot of French stations and also Benelux and UK up to 108!!

But who will get the longest distance transmitter and get the "Skipmaster" T-shirt? Some Algerian stations were noticed and perhaps Morocco but not yet identified for sure.
The longest distance nailed in the Wednesday evening to be Portuguese RFM Faro 89.6 MHz. Distance 3263 km. This might chance during next days after checking recordings.

In the morning after tropospheric silence we got slightly better Latvian signals. New transmitters were observed of Radio Valmiera. It seems to be national now with 9 new tx and 3 more to come. Radio Skonto has also new transmitters. They might have local programmes. Let's see (or hear).
Posted by Harri Kujala at 09:50 1 comment:

With wonder we follow the empty days coming in a row. So far we've had only one opening on Friday midnight (local time) beamed to Scotland... Today weak meteors, zero tropo improvingin afternoon.

Before midday Iran's E2 TV-carrier 53,7396 MHz (100 kW) was obeserved with Icom. That gives a little hope for the coming days. OIRT gave some signals after midday. In the evening we followed Es-opening in SW Europe again - nothing here. Evening's card-game was won by JTK.

I must remind you of the characteristic of this QTH: When there is tropo going on here the band is full of signals and it is difficult to find an empty frequency - but the band is totally empty on zero tropo, so silent that you think the antennas or cable-connections are broken. 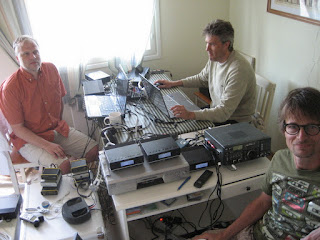 Posted by Harri Kujala at 09:55 No comments:

No sign of Sporadic-Es...!!! Total silent in Europe! Today's card-game was won by Juha (JY). After cards we had sauna. Those were the results of today.
Here one thing to be noted: MB, JTK and JY run "Utö Marathon" every morning before 9 o'clock. The length of that is about 5 km. The running path goes to every corner of this tiny island (size of 1 x 1,5 km).

Quite frequent meteors are crashing to ionosphere this morning and afternoon. Many countries and high-power transmitters are observed around the band - but not so long bursts.

Here below is a photo of Jari's (JJK) equipment today: You can see 2 x Perseus with FM+ on H- and V-polarization on the screens. On the table is 2 x Dientronik Perses for (48 - 74 MHz, grey boxies), connected when needed - and also one Sony XDR. On the backside of the table is Jukka (JJS) listening with 3 x XDRs. (click) 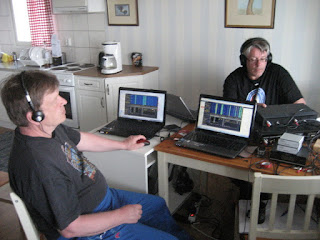 Posted by Harri Kujala at 10:28 No comments:

Boring Sunday on the wavelengths - totally empty day (there were good conditions in SW Europe) - so, playing cards. Today's game was won by JTK.

The "Skipmaster" T-shirt (longest skip's holder) is now on Juha (JY). He identified GR Parlamento (audio-id) via meteor on 101.7 MHz. This transmitter is located sligthly to the south of Bari, South Italy. Distance is 2246 km. A few more photos (click): 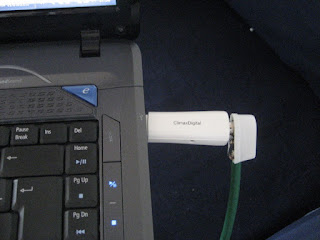 DTV300 Climax Digital SDR-USB-stick connected to Körner-antenna. This tiny receiver costs only 15 € but gives nice results in Utö. The highest sensitivity and gain can be used in Utö because there are no local transmitters. Below is a printscreen-photo around 90 MHz (2 MHz spectrum with V-polarization): 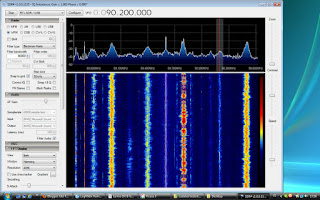 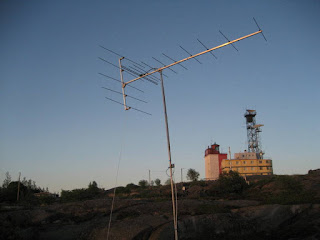 This monument in the south part of Utö is mounted in 1989 for the little boat called Draken with the crew of 11 men. It stranded to Utö's rocks only 150 m away from island in 1929. Only 6 survived. They stayed in the close rocks even for 3 days before they were rescued after furious seafaring. Three men tried to swim this 150 m to Utö but only one survied. 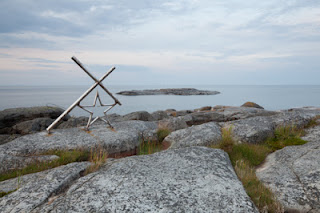 Posted by Harri Kujala at 11:41 No comments:

Evening's card-game was won by HKU (He won ice-cream). 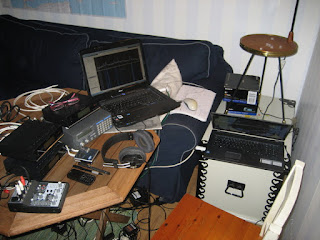 DTV300 USB-stick SDR-receivers are working here well because of no local transmitters (no harmonics).
Posted by Harri Kujala at 23:09 1 comment:

During the Friday good tropo-signals all around and also strong meteors, as usual. Meteor-skips are here exceptionally strong comparing to continent. For example on 87.5 Italian Radio Capital and tentatively Radio Norba was observed shortly many times.

The "Skipmaster" T-shirt holder is now Juha (JY). He identified Rete 105 on 93.6 MHz via meteor (Terracina-tx). This transmitter on this frq. is in Latina-province, south of Rome, Italy. Distance 2126 km. (Still long way to reach last summer's result).

No conds in evening - Playing cards outside: 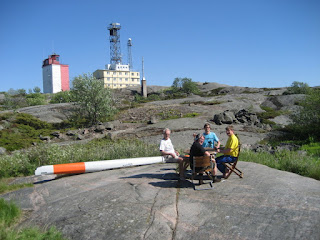 Posted by Harri Kujala at 22:13 No comments:

Utö12-pedition was ready in Thursday evening. This is a 6th summer in a row. We arrived at 6PM. This time we have only two Körner yagi-antennas (V and H) devided to two houses for 6 listeners. Now we have better coax-cable to minimize losses (about 3dB/100m).

During installation on Thursday evening there were exceptional tropospheric conditions to Northern Sweden
(and also all around Baltic sea). NRJ Örnsköldvik 107.1 (local id) was identified with only a whip-antenna in the the terrace!! The conditions died out when antennas were up but the band is now full of close transmitters.

On Friday-morning Skipmaster-T-shirt (longest distant-skip holder) is holded by Marko (MB) with Kiss FM, Romania 88.0 MHz. This is id'ed via meteor. No Sporadic E-yet.

Installation-photo below (Utö lighthouse is in the background) Left: JJS,JY,JTK,MB,JJK, photo HKU (the shadow). 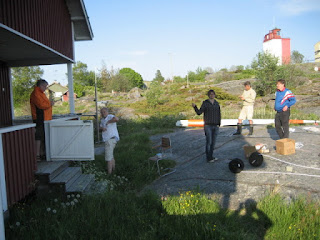 Again we will have competition who will catch the most distant transmitter. This DXer will win "Skipmaster" T-shirt. Only one piece printed. Last summer this competition was won by Marko (MB) with MFM Oriental from Morocco, 89.2 MHz (16 kW). Distant of this multihop skip was 3685 km.  (ClickT-shirt for better view). 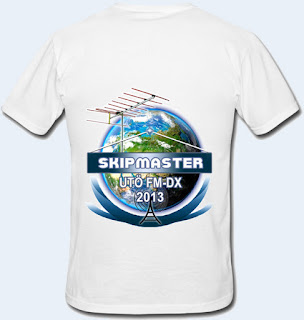