FM-DX-peditions in summer 2019 are over. Very poor results!

Poron3-Virolahti and Utö2019 FM-DX-peditions are once again over in Finland. The DX-results of these camps were very poor, close to total disaster.

Poron3-Virolahti - 3.6-15.6.2019
The results were catastrophic, even worse than 2018. Sporadic E- propagation was observed only for about 2 hours during 12,5 days!
Tropo:
Several new stations were catched from Russia with tropospheric propagation.

Sporadic E
The most interesting opening in Poron3 was 20 minutes to Yugorsk-city area in Khanty–Mansi in distant Russia almost 2300 km away. MUF was over 108 MHz and stations were audible from 2-3 cities.
On the last day (extra 15.6) there were 1,5 h opening to Italy (Emilia Romagna, Perugia etc). MUF 105 MHz.

Meteor-scatter. A lot of meteor-skips were observed, like every June.The longest meteor-skip lasted over 4 minutes!

Utö2019  - 5.6.-16.6.2019
This pedition was very close to total disaster. Before the last full day (Saturday 15.6 and Sun morning 16.6)  there were only a few minutes of Sporadic E for 10 days!
Tropo
Several new Swedish stations were logged, thanks to new frequency allocation in the end of 2018 in Sweden (new stations and frequencies opened).

Sporadic E
The first 10 days were almost totally silent on Sporadic E in Utö!! Only a few short peaks were obeserved, several minutes in total.
The last full day, Saturday 15.6, gave 1,5 h opening with usual Italian stations from Emilia-Romagna-Perugia areas. The highlight of the day and the pedition was strong Ankara-opening up to 108 MHz giving also stations from Istanbul and around. Lasted about 50 minutes fading up and down.
Sunday morning 16.6, just before leaving the island, there were strong opening to TUR, GRC, BUL, ROU,I etc. giving some releaf for the last moments.

Meteor-scatter. A lot of meteor-skips were observed, like every June. Dozens of stations were id'ed from Europe, mostly high-powers.

The results of the these two peditions were close to disaster -  and worse ever in the history of FM-DX held in June period.

Posted by Harri Kujala at 09:46 No comments:

Two groups of Finnish FM-DX-listeners gathered once again to intense DX-camps. Traditionally these camps are held in the beginning of June for 10-12 days/nights.

DX-camp Poronniemi, Virolahti, SE Finland 3.6 - 15.6.2019
Located by the sea in Virolahti,close to Russian border. Arranged for the 3rd time. Participants were HKU, VJR, TAK. The group used 6 antennas with 12 computers and SDR-receivers with 110 Tb harddisk-space! No traditional receivers were used anymore. 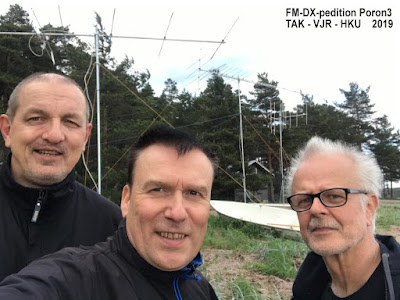 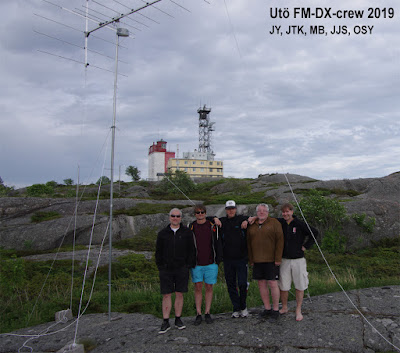 Posted by Harri Kujala at 22:38 No comments:

Results in Utö: A few openings for about 6-8 h time fading in and out in the lower band  - and MUF only briefly over 100 MHz.  The opening areas were mostly to South France and South Italy. Only year 2011 has been worse.
The annual card-game winner was JJS, beating JTK with 2 points.

Both camps will return next year in the beginning of June. 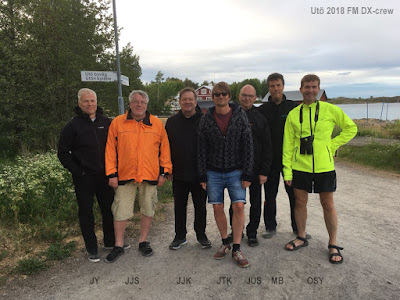 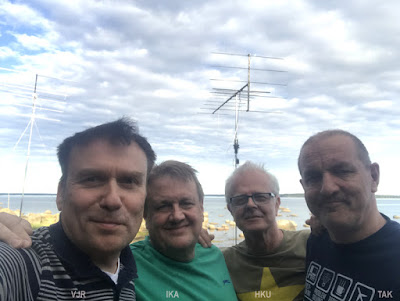 Posted by Harri Kujala at 10:53 No comments:

Last full day in Utö2018-pedition was silent. Last 10 days have been been very poor for FM-DXing in Finland.

Utö2018 will be closed tomorrow morning.

Posted by Harri Kujala at 21:20 No comments:

Trying to conjure and motivate Es-conds up with gifts for Essi!

The Sporadic E-condtions have been catastrophicly poor and weak in the beginning of June in Finland. During two traditional FM DX-camps there have been openings only a few hours time. Nothing to DX on the FM-band!

DX-crew in Utö tried to conjure and motivate Sporadic E out with a well prepared ritual for Essi (the Goddess of Sporadic E). This action with gifts was made in Wednesday - but unfortunately it did not work!

Here is a video of the ritual with gifts for Essi made by JTK and JUS: 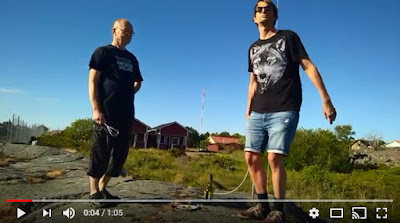 This well prepared show did not work...

Posted by Harri Kujala at 12:07 No comments: 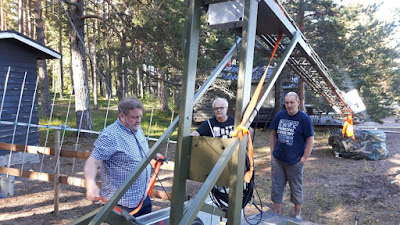 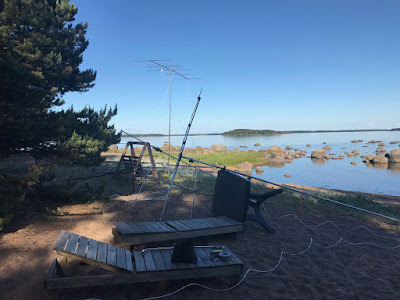 Posted by Harri Kujala at 20:08 No comments:

Utö observations 14.6: Some good signals in the morning from Russia on OIRT and it peaks shortly on 87.5 MHz to Russia. But after that DX-silence continues.

Virolahti observations 14.6: Some signals on OIRT in the morning - and thats it...
Posted by Harri Kujala at 08:59 No comments:

Posted by Harri Kujala at 23:35 No comments: 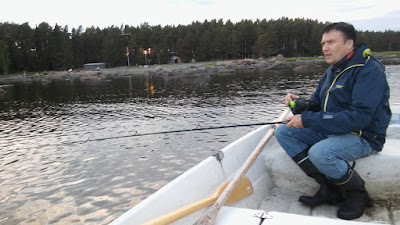 VJR fishing (Poron2 FM DX-camp 2018). Yagis are visible in the  background
Posted by Harri Kujala at 12:07 No comments:

There were no big difference between these 2x and 4x wavelength heights. 12 m gave slightly better signals when tuning semi-tropo-stations from South-direction, but with not so big boost. At the same time 12 m height also gave stronger signals from local stations of the back and slightly blocked some useable frequencies.
We expected to have bigger differencies from front (DX) and back (local interference).

There might be bigger differencies when comparing these antennas during Sporadic E-opening. Everything is ready to make quick 6m/12m -comparison during Es with SDR Play PSR2 (Two antenna inputs).  Let's hope to have that chance!

Total silence in Utö and in Virolahti on Sunday.

The photo at Sunday night (after sauna) in Virolahti FMDX. Silent and blank sea - and unfortunately the same on FM-band - blank and silent. 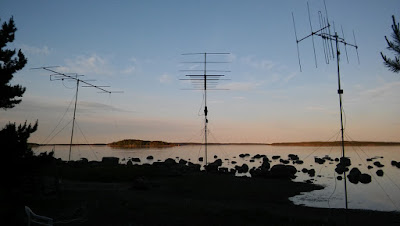 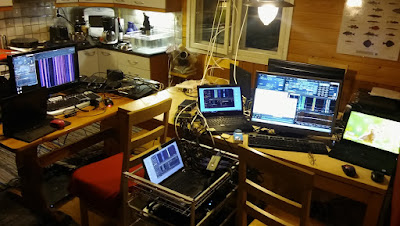 Kitchen is the heart of the DX-camp with dozens od PC's and rx's. 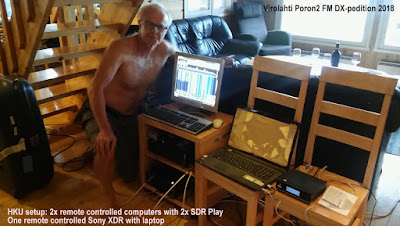 Here some numbers of the equipments in use in Virolahti Poron 2-pedition:

Posted by Harri Kujala at 15:21 No comments:

Utö observations 9.6: The late afternoon gave some Balkan-stations, maily Serbia  and Bosnia and also Hungary. MUF slightly over 100 MHz. In the late evening there were opening to South Italy, like Brindisi, fading in and out.

Virolahti observations 9.6: I the late afternoon an opening mainly to Austria,Slovenia and Italy lasting about 40 minutes. MUF shortly up to 108 MHz.
Posted by Harri Kujala at 00:14 No comments: 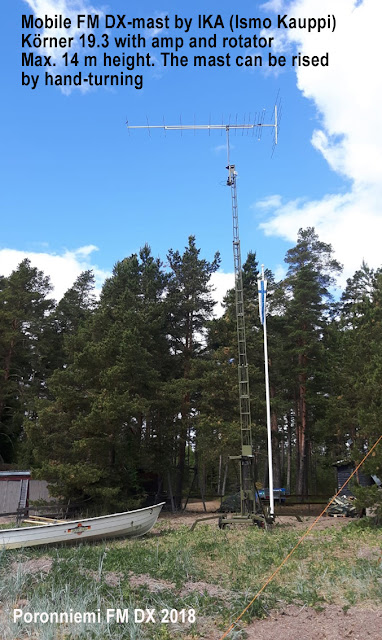 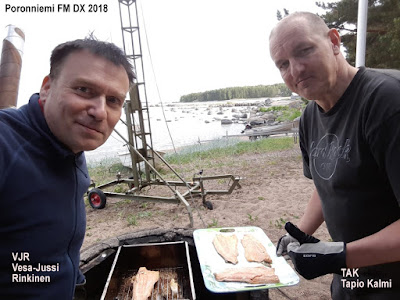 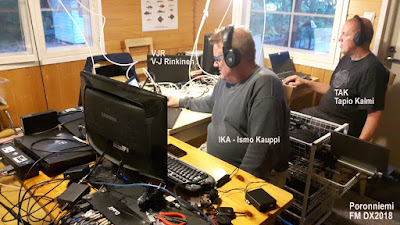 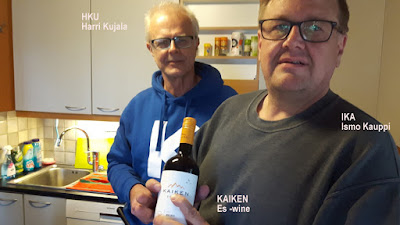 Posted by Harri Kujala at 22:09 No comments: